I am hopeful about new batteries as I am hopeful that one of the many companies who claim to have solid state lithium batteries figured out, actually do.  The story I am truly excited about is the new inverter technology from Enphase. I will go into all of this in more detail in my post, but first I need to give you some background.

I want to remind you about my background on this subject.  My degree is in Electrical Engineering and I did actually make solar cells in a class in college.  Sure, the ones I made were far from the performance of today’s, but the process I used is not significantly different than what is done today for monocrystalline solar cells; the most efficient ones on the market today.  I should add that making them is energy intensive and you use lots of nasty chemicals.

The first question to ask is where do you live.  I say that because there is very good data for the US made available by the government.  They have maps based on altitude, latitude, and average cloud cover.  All of those effect the efficiency of solar panels.  The less air above you, the less air to adsorb your sunlight, and thus the more gets to your panel. For latitude, the effect is similar to altitude in that the shortest path through the atmosphere is perpendicular to the curvature of the surface of the Earth at that point; thus the equator gets the most sun, and it drops from there.  (Actually, it oscillates between the Tropic of Cancer and the Tropic of Capricorn based on the season, but I simplified it to make my point.) Clouds can drop the output of your panel by 30% or more.

Now out of that, here is what they say you can expect to be available to your panel assuming it is static, pointed due south, and tilted to your latitude which is optimal. 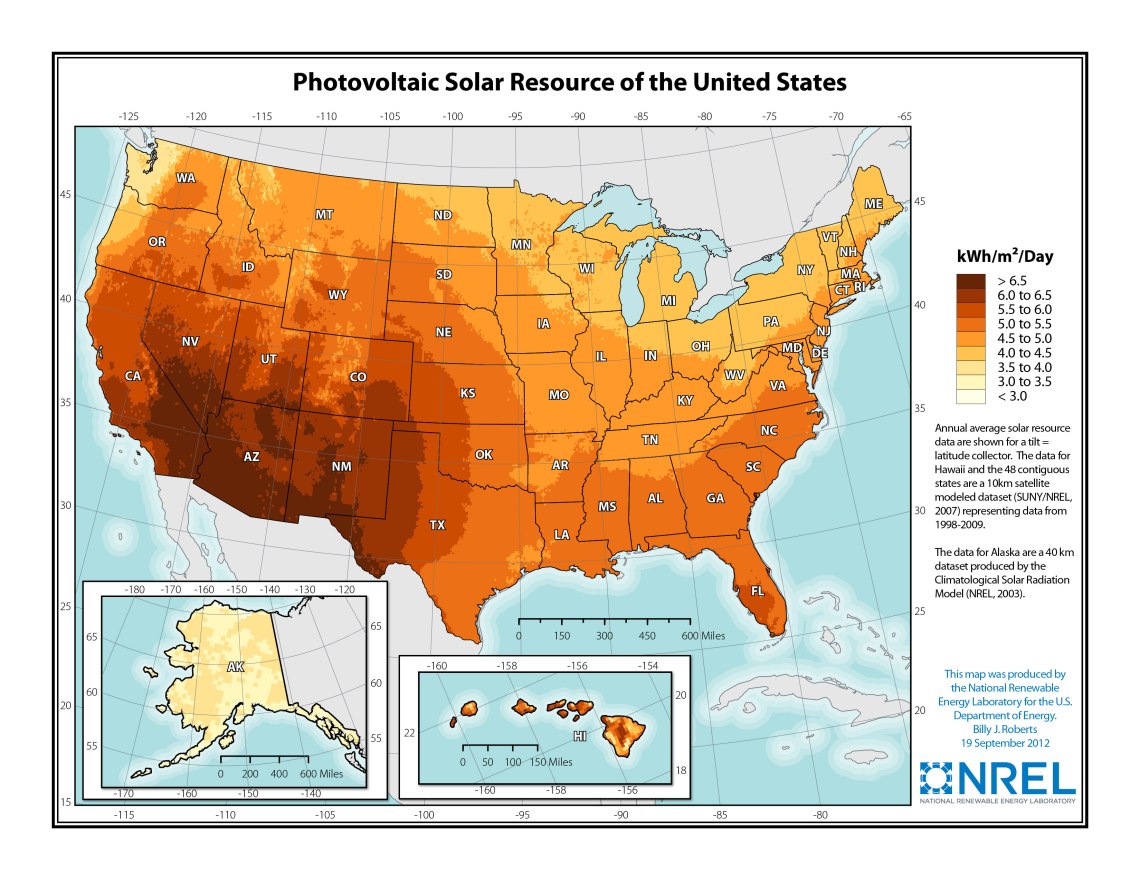 There is a ton more data available at their site. After figuring how much you can get, then of course you have to multiply that number by the efficiency of your panel, say 20% is about what you can get retail these days. That means you will get 20% of what you see in the image above in that area per square meter of solar panels. Solar is better in the South, and best in the dry, high altitude deserts of the Southwest.

That is where we are today.  When the sun is shining, your panels can add electricity to the grid.  When the sun goes down, you are going to need those traditional power plants. Natural Gas, Coal, and Nuclear together provide over 80% of US electricity.

For solar to take a larger part of that, besides us having to deploy more panels, we are going to need something to store the energy generated when the sun is up, and we will need something that can supply power more accurately to the load at the time of generation.  That second one is more complicated, so I will address it second.

One of the big problems holding solar back is the lack of cheap, large scale energy storage.  Energy storage is considered in the industry in one of three levels; hours worth, weeks worth, and seasonal.  We already talked about the first case; night for solar is a problem. A nuclear plant supplies its rated power for over 90% of the year. Coal is in the 60% range, and natural gas is in the low 40% range.  Solar in sunny areas like California is in the low 30% range, and a lot less (10-20%) in cloudy areas like the Northeast or places like Germany. This means that a 1GW nuclear plant will provide that power for 27 days out of each month, all day, all night.  Solar will only get you that for a few hours a day. I used different time scales because traditional power plants like nuclear usually run for weeks or months before they shutdown for maintenance; they generally do not stop providing power for some amount of time each day.  That’s what we need, and grid operators balance the load, performance, and downtime for each power plant around the seasonal power demands.

The fact is that solar and wind for instance can have significantly lower output for hours, days, or for weeks at a time over most of the earth due to weather, long  windless spells, and long spells of cloudy and partly cloudy weather is a problem that other power sources do not share.  This is why we need batteries to handle short term power drops in generation, or spikes in usage say for the hottest few hours a day during a summer heat wave.  We need weeks worth of power as well for solar as  I described and something called flow batteries could be the solution there.  For coal plants, they just stack up the coal outside the facility.  Nuclear can go years between refuelings, but they usually don’t go that long. This technology is promising in for the first and second level of energy storage. There really is no technology for seasonal energy storage.  To me, that’s really what fossil fuels are, and what bio fuels could be if they could be made cost effectively.

The part of this discussion that I am quite excited about is the new inverters.  Basically, if you have solar panels on your home, you can not use it when the power goes out.  They do that to protect your panels and your home.  Previous inverters could not adjust the power output of say your vacuum and or your fridge.  This means that when the power goes out, your solar panels are useless until the local utility fixes the problem with the grid.  This new inverter will allow you to use your solar panels when the power goes out.  For off grid uses, this is huge.  You do not need batteries to smooth out your energy supply.  Batteries is how this is done now off the grid; your solar panels charge the battery, and the battery can adjust its supply of electricity to your devices based on the load (what you have turned on). Now you will still want batteries for power at night, but with this utilities could actually start using your solar panels to help power the grid.  Again their job is to constantly match the supply from all generation with the load from all things plugged in.  If you think about it like that, it’s almost amazing that it works at all.

I am looking forward to the day when we have solar that uses inverters like those, and batteries bigger and cheaper than what Tesla sells for the home.  I want a few days worth of energy storage, not a few hours. I already have a big tank of oil in my home; natural gas is not available in my area, so the risks of the battery does not concern me.

This site uses Akismet to reduce spam. Learn how your comment data is processed.

I am not a financial adviser.  In fact,  I suggest you get one when you are ready.  Beyond that, and more to the purpose of my site, I want you to be prepared for that conversation by doing research at sites like mine so that you can get the most out of the conversation if you decide to have one.